Networking is often seen as small talk and chit chat, not exactly the favourite activity for somebody with introverted tendencies. One of the “standard” pieces of advice given to people is to arrive early at networking meetings. Does this really make networking easier for introverts? 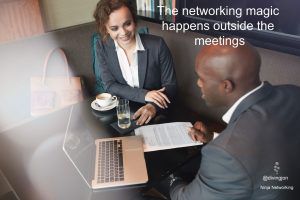 A standard piece of advice is to arrive early. Firstly, this message gets given to everybody, introvert or not, which is a little suspicious in itself! If you don’t like being in groups of people, why on earth should you make yourself do it for longer than you need to?

Benefits of arriving early at a networking event.

Problems with arriving early to a networking meeting

How to network as an introvert – arrive early?

I don’t know which is the best advice for you, at the meeting you’re thinking of attending. What I do know is that “following the rules” and doing things without some detailed thought isn’t playing to an introverts strength.

As an introvert you can probably be one of the better networkers, but not by acting in ways that don’t make sense to you.