Whether in meetings, networking events, or just team gatherings there are three behaviours that destroy team dynamics and reputation. This article is about what not to do. More importantly why you, as an introvert, need to be extra vigilant that you’re not displaying these behaviours. 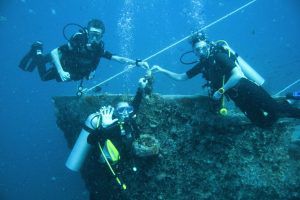 I spend most of my spare time underwater, anywhere between the Arctic Circle and New Zealand, although mainly near Swanage Pier. One of important pieces of diving equipment is the BCD. The BCD (buoyancy control device) helps divers stay in the right place without rising up through the water or sinking deeper (and holds their air tank).

BCD – as a leadership tool

BCD is also a useful leadership acronym, keeping us us and those around us around us in the right place, rather than employing the three destructive behaviours. In this context BCD stands for:

You’ve probably sat in a team where there’s (at least) one other person who is regularly blaming others for issues that are her fault. It doesn’t help the meeting, and certainly doesn’t help the team dynamics.

We can all fall foul of this “rule” but consider about what being known as a complainer does to your reputation. It damages your reputation, and doesn’t help the meeting or team development.

It can be very tempting to use complaining, or sarcasm, as a method of generating connection between two people; but it doesn’t help in the longer term.

One networker I know would spend his time announcing how he was the positive and proactive (person in his profession), whilst spending his time complaining and moaning in one to one meetings. He thought he was only doing it with one or two trusted colleagues, in reality it was his normal method of generating conversation; his reputation was dreadful.

As an introvert it may seem hard to get into conversation, but using complaining (or bitching whining and moaning as I often call it) is not a good route; although it can seem very tempting. There are better ways of dealing with “small talk” (click here) and getting on with people.

How often have you sat in a meeting like the one a friend of mine recently described to me:

Each person in the team had their responsibilities, but one hadn’t done what he should have done. The whole meeting consisted of him defending his (in)action, which annoyed the others and kept the focus on his lack of achievement.

Why are introverts more susceptible?

Everybody can, and often does, fall into those three bad habits. However, introverts need to be more careful:

Being aware of the issue is the biggest way of reducing the problem, finding ways of “being better at small talk” can help, and managing your energy levels will help.

What do you do to remain positive? I spend more time underwater, with my BCD!

PS – For leaders of introverts

If a quieter member of your team starts to behave more negatively than normal, they’re probably feeling under more pressure than normal. How can you address the issue sympathetically and help, thus restoring your team to full effectiveness?

These 3 destructive behaviours are ones we should all avoid. BUT, It's even more important for introverts to be aware of them (and avoid them) - here's why.
Related content you may find useful:Business meetings | Business networking | Managing staff | Networking
This website uses cookies to improve your experience. We'll assume you're ok with this, but you can opt-out if you wish.Accept Read More
Privacy & Cookies Policy