Most introverts dislike (insert stronger word to suit yourself) arrogant and egotistical people (but let’s be honest many other people dislike them too). It’s often said that many introverts would benefit from being more assertive. So, what’s the difference between arrogance and assertive and can introverts be assertive? Recent discussions quickly added two more words into this word soup- aggressive and self belief.

An assertive person is confident, maybe forceful and will stick to her opinion, unless they given good reason to change their point of view (which implies they listen which is a good distinction to arrogant).

As opposed to just LOUD 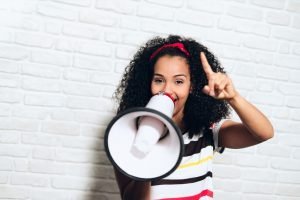 Can introverts be assertive?

Yes, of course and and many are. Being an introvert doesn’t mean that you are quiet or shy, Many great leaders are introverted (Gates, Branson, Zuckerberg to name a few) and I’m sure they had to be assertive at some point in their careers.

Being more assertive is something that would probably benefit many introverts. Some of the first steps might be using your internally generated self confidence, to let others know what you’re good at and what your views are.

Self belief is more about pride and belief in your abilities. Quietly confident is a phrase I often think of when I think self belief, it  certainly applies to many introverts.

That’s not to say self belief has to be quiet, otherwise it would be hard to market yourself as an introvert. But there’s the danger, many introverts don’t market themselves enough, perhaps because they don’t want to see arrogant?

Arrogance and a strong self belief are not the same things; you can have a self belief, be assertive, successful in business and not be arrogant. Just realising that has helped some people!

I often see it as  something that covers up insecurities and maybe desperate cravings to be recognised or respected. An arrogant person is rude and unlikely to listen to another’s point of view.

Compared to a strong self belief, arrogance involves more boasting, probably putting down other people.

Where does aggression come into this?

Being aggressive is about making assaults (not just physical), literally ‘to agress’ (commit the first act of hostility or offense; attack first).

How does that help you reconsider your actions and that of others around you?

Do you need to be: